The interviewee moved to the far south coast primarily for lifestyle reasons – ‘we just liked the kind of laid-back, small country town feel’. He grew up in Port Stephens, Newcastle and has lived in Canberra as well, so is familiar with the south coast area. When living in Newcastle he was active in the local surf club, and continues his involvement with the local surf club in a clerical capacity.

Throughout his life he has enjoyed ocean-based sporting activities such as snorkelling, spear fishing, swimming, and kayaking. He continues to engage in these activities, spending a couple of times a week at the beach, with the surf club, and comments on the positive social aspect/value of these activities.

He discusses the coastal environment of Port Stephens, changes since 1950s, and talks about his son’s work as a marine biologist in the area, studying environmental impacts such as tourist boats, on dolphins.

Marine protected areas and sanctuary zones on the far south coast are discussed, in particular Burrewarra Point, which the interviewee has known since the 1970s, before it became a marine park. He vigorously supports marine protected areas and laments the lack of political will to enforce sanctuary zones. Personally, he is prepared to pay in economic terms for protective environmental measures. On the south coast he has observed illegal activities such as abalone poaching, and comments on the rubbish recreational and professional fisherman leave behind. His biggest concerns however are government complacency, and issues such as silt running down from the river and occasional raw sewage overflows. 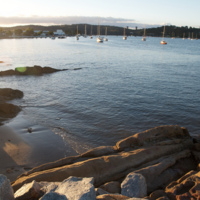