He has an intimate knowledge of coastal dynamics from his experience as a surfer, and postgraduate research in coastal dynamics and processes. He loves surfing for its relaxation and its physical challenges. He reflects on what he has learned from surfing, being able to read the ocean, waves, tides and winds. Being a surfer has given him an intimate understanding of the environment, informing his research on coastal processes such as wave and rip modelling.

The interviewee accepts the inevitability of coastal development, and suggests that it is possible to move forward as long as communities are kept out of hazardous areas that are prone to floods and erosion. Environmental processes need to be understood. For example, in New South Wales, headlands are left undeveloped, and houses are hidden behind foredunes. Coastal development should be ‘nodalised’ near services, not spread along the coast. A reference is made to the NSW Coastal Policy.

He surveys local beaches once a month, and notes the environmental impact (generally) of visitors from Canberra, and weekenders. Jet skis used for recreation are a pest, creating noise and air pollution, but are also useful for research and rescue purposes. He comments positively about marine park exemptions that allow fishing off shores and rocks, and feels the controls are sufficient with bag and size limits in place. He notes more people fish from boats, but overall there is a small population of fishers.

The interviewee is concerned that while local government recognise the value of coast to the local community, state and federal government do not. In order to respond to issues such as rising sea levels, funding is required at that level in order to sustain coastal management into the future. 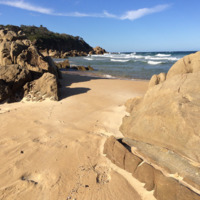