An interview in six parts with Dwayne Willoughby.

Dwayne talks about fishing with his family; tagging fish; the influence of water colour on fish colour; fish parasites; his two boats; electric motors; and his dislike of nets. He says the water takes two years to clear after a flush and mentions that lure fishing is at its best when it does. He discusses the river ecosystem; bank stabilisation; re-snagging programs; the impact of Carp; carp musters and changing attitudes towards angling (catch and release). He also talks about flooding and fish breeding habits; yabbying on the Warrego River; and mentions storing yabbies with gum leaves and sighting black Yellowbellies at a place called Black Rocks.

Bourke Shire Council Environmental Officer. Has a fishing hut at Beemery - half way between Bourke and Brewarrina. Passionate catch and release fisherman. Fishes with father-in-law and extended family. Tagging fish with sheep tags. 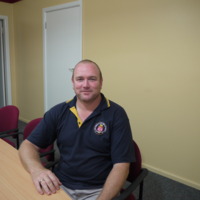