An interview in three parts with Greg Sharp.

Born in 1964, Greg Grew up in Croydon, Melbourne, before working as a fisheries officer in northern Victoria. He shares his experience in freshwater fish research and surveying, and explains the influence of fires, farming, pests, weeds and floods on the river ecosystem. He mentions a big Yabby catch in 1994 and a particularly destructive black water event at Broken Creek.

He discusses changes in fishing culture, noting an increasing awareness and concern for the continuity of species and environmental sustainability. Greg says that these attitude shifts express themselves in different ways, from the sponsorship of vegetation regrowth programs, the introduction of catch limits and size restrictions, and to the practice of catch and release, 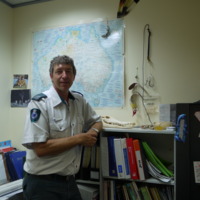