The data from this study region includes 8 oral histories (audio as mp3s, and transcripts) and 5 image galleries, as well as a georeferenced hand-drawn map of the area.

The Paroo River catchment is in the north‐western corner of the Murray‐Darling Basin. The river flows across the Queensland border into New South Wales, where it spreads out over floodplains. Beccause of this dispersal and the hotter, dryer climate, it now rarely flows into the Darling River and is known as an ephemeral river. It is the last unregulated river of the northern Murray Darling basin and sustains important wetlands and sub-artesian waters.

The region has been inhabited by Aboriginal peoples for around 20 000 years; the Maranganji, Kalali, Badjiri, Kunggari and the Parundji people, from whose name the river's name is derived. 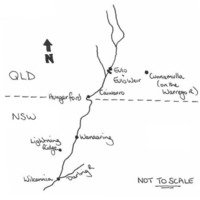